skip to main | skip to sidebar

Not quite sure of hours, though it was open at 11:30am on Sunday (time that I went)

Table Spice: Tobasco - I asked the waitress and she quickly brought be Pepper Plant

It's Sunday morning and my friend Max and I are on our way back from Big Sur, where we had met up with some friends the day before to go camping. We didn't arrive until around 8:30pm because we had gone to the second round games of The Dance (NCAA Tourney) in San Jose. Well after a not-very-good night of sleep, we got up early helped pack the stuff up and headed back to the Penninsula. Since I wasn't able to get a Breakfast Burrito the day before, I thought it would be a good time to go and find one. One thing that wasn;t on my side was that my Droid had died the night before, and so i couldn't use it to search for breakfast restaurants (this also meant that I wouldn't be able to take a picture of the Breakfast Burrito). So we veered towards Pacific Grove and started searching for places that might be able to quench my Breakfast Burrito hunger. We ended up finding a place called Breaker's Cafe, with signs in the windows exclaiming delicious breakfast! I'M IN.

We get in there smelling of cold fire smoke and trees and looking like a lumber jack and an out of place ghetto white kid and find a place to sit near the back. It's a smaller place, but smells good and has the feel of a hardworking diner. I immediately snatch up a menu and head towards the most likely position to find a Breakfast Burrito - low and behold, ANOTHER restaurant can't seem to understand that F**** Breakfast Burritos are incredible!!! If I'm not so tired at this point I would stand up and shout to the sky WHYYYYYYYYYYY?????? Instead, I sip my rather strong coffee (two cups got me incredibly light headed and shaky - the good stuff) and find a way to rig a Breakfast Burrito. I finally come across an item on the menu that will likely do the trick - the name of this dish is

Unfortunately, I do not have a picture to show you this scrambled mess, suffice to say that it is exactly as it says - and a lot of it. I took this gooey scramble and shoved as much as I could into the tortilla, drenched it in Pepper Plant, and chomped it down. What made this burrito really good was how everything was smashed together into one big messy scramble. While meant to be eaten alone, I feel like putting it into a tortilla is the way to go for this one. What I can't understand is how they couln't think of putting a Breakfast Burrito like this ON THE MENU?? I was close to asking the waitress, but again, too tired to care.

I was only able to eat just one of the Breakfast Burritos (two tortillas as sides) so I took home the second one and ate it for dinner. The amount of food that was provided created two giant Breakfast Burritos, so actually a good price for the amount of food. And it ended up being pretty decent, though nothing out of the ordinary. There is only so much one can say about a Breakfast Burrito unless the ingredients vary. But the fact that you have to take an alternative route to get to your Breakfast Burrito destination is unique in itself, and didn't disappoint. The service was fairly slow, but there was only (seemingly) one waitress this day and so I can't blame her for taking her sweet time. She was definitely fast with the coffee - maybe that's why I was tweaking a little bit with lots of coffee and nothing in my stomach.

I had heard good things about the Breakfast Club from a couple colleagues of mine at work and so I decided to try it out. I had a couple of friends in town for the weekend and, knowing that they also enjoy breakfast burritos, decided to include them in my expedition. This joint was packed and busy, waitresses moving all over the place in an almost hectic fashion. We came in, sat down, and got to it. The name of this breakfast burrito is - 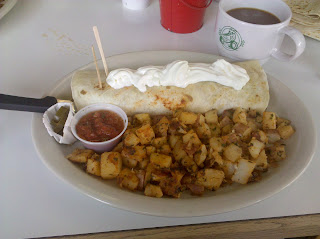 Superb. This had everything and more, hardly necessary to douse it in sauce (though I can't help but spice it up a bit) - it had full fantastic flavors, it was enormous, and I was served in about 6 minutes. All of the waitresses were on top of their game, and it was really an overall enjoyable experience. I was shocked at the steep price - I feel like the meat should be included in the total price and not an add on - but it was expensive for a reason, and that reason is quality.

One thing that really stands out to me with this breakfast burrito is the uniqueness of it. Sure, you have your standard ingredients, but by mixing it up a bit - adding Ortega chiles, jack cheese, and cooking the home fries with some sort of special seasoning, it becomes something that really stands out. My friends all got the same thing as me and agreed that it was better than any they had had in a while. I will need to return to test consistency, but their coffee woke me up, their breakfast burrito made me full and I left with a smile on my face.

Lucky me, this place is right down the street from where I reside, I will definitely be back!!!

Alright, so let me preface this by saying that I fully expected  this restaurant to have some high quality breakfast burritos. I had heard from multiple sources that it had some fantastic breakfast items at reasonable prices. It is a smaller cafe, well kept with great service. The coffee definitely did the trick - nice and strong as it should be.

WELL, upon inspecting the menu so graciously laid out before me, I came to find that there in fact was no breakfast burrito on the menu. Really?? I feel like it is a cardinal sin to exclude a fairly easy yet quite popular item from any sort of breakfast menu. Determined to get what I came for, I kindly asked the waiter if they would be able to make me a breakfast burrito using the ingredients from one of the other menu items. He went back and asked the cooks if they had any tortillas, and as they did indeed have tortillas (that fact kind of confused me - why would you have tortillas at your restaurant when you do not have any items on the menu that use the tortillas? Well, maybe there was an item on the lunch portion), I was able to have a custom made breakfast burrito, seen below. 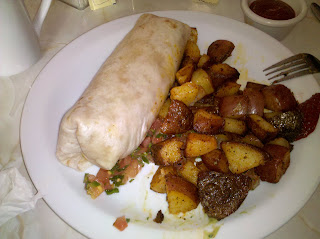 I was unsure how this guy was going to turn out, but after digging in I was quite surprised at the results. Again, I really like when my breakfast burrito has the home fries mixed into the burrito itself, but combined this was quite a good burrito. They loaded me up with lots of guacamole if you like that (I do not) and the ingredients within the burrito were well mixed, however lacking any sort of really strong flavor. Imagine ordering scrambled eggs, two sausage links and home fries and wrapping them up in a tortilla - that is essentially what I had. Still, any sort of pepper sauce really livens up a breakfast burrito and it turned out to be a really good meal.

I will definitely go back and see if they will make me another burrito, and if the results stay consistent I will definitely suggest that they add a breakfast burrito to the menu. Compliments to the chef!

I have noticed in the past that restaurants tend to have just one breakfast burrito that they serve, like a signature item. I feel like they will either have the one burrito, or they will open the menu up for a 'create your own burrito' type deal. This place, however, had two breakfast burritos to choose from, along with omelets, pancakes, and all other types of breakfast items. This tallied points right off the bat, ensuring that I will eventually return to try the other breakfast burrito. They have outside seating, although pigeons will occasionally attack you and your food, hence the water bottles on each outdoor table. Kind of fun, but got old quick. The burrito that I got was called: 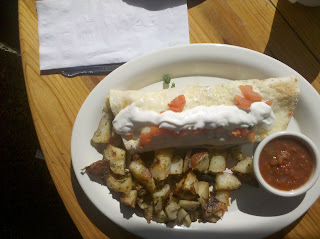 Presentation was alright, I mean, this burrito is MASSIVE, which is always a good thing. If you're going to serve a dinky burrito, it had better be insanely delicious. It just has to. Well, after digging in, I found that although the ingredient lineup sounded spectacular, the burrito itself was quite plain tasting. All of the ingredients seemed to be in the wrong spots - it was all combined so that every bite included all of the delicious tastes found on the plate. I can normally finish a breakfast burrito that I've started, however I did not completely finish this one, and not out of a full stomach. Just didn't do the job for me.

As I was forced to mash the ingredients together myself, topping the now-scramble with Pepper Plant a la muchos, there were hints of a great burrito there, if they could just combine it all correctly. This place is a breakfast joint, though I get the feeling that they are known more for their pancakes and/or waffles then their breakfast burritos. An awful shame.

I'll go back for the other burrito, but in definite due time. Hopefully they put a little more effort into it the next time around.

What It's All About

One of my very favorite things to do in all the world is as follows;

Waking up after sleeping in late on a Saturday morning,

throwing some comfortable clothes on,

puting my shades on and jumping in my car,

driving to a random restaurant known to serve breakfast items,

sitting down (preferable outside (preferably on a sunny day),

and ordering the breakfast burrito that they serve along with a hot coffee or espresso item.

This to me is heaven. Not much else can beat that, especially when the breakfast burrito is outstanding. I have tried breakfast burritos all over the place, from my home town of Windsor and Santa Rosa, CA, to my college town of San Luis Obispo, CA, to my current town of Monterey, CA, as well as everywhere else that I have ever traveled.  Since I am sure that there are others out there that enjoy breakfast burritos as much as I do, I have decided to start a blog to record my thoughts on the various breakfast burritos, predominately across California. I use my phone to make note of restaurant name and address, name of burrito and price, ingredients, thoughts on the burrito, picture of plate as served, and a rating out of 10 points. IF anything else, this will be a good reference for me to come back to in the future (as well as gives me the green light to actively search out breakfast burritos = JOY). I know that we all have different tastes and opinions, so know that everything following this can be taken with a grain of salt. But it may at least give you an idea of what is out there, and maybe you try them yourselves and let me know your thoughts (this is assuming that more than just me will ever view this thing - HA).